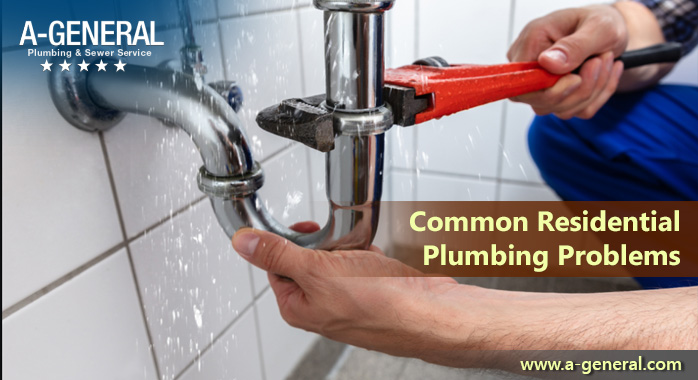 Posted by admin on Jul.31, 2020 in Residential plumbing service

Life is the shorter (and infinitely sweeter) alternative to the word problems. No life, no problems. Larger the life, more the problems. And some, like leaks in the bathrooms, dripping taps, overflowing sewer and a profusion of netherworld problems give vastly different outcomes to lives. On a perfectly fine day, one could slip and have a bad, bad fall in the bath or the kitchen, come across insane water bills due to leakages, disturb the neighborhood with overflowing sewers etc. All of these nightmarish scenes thankfully have ONLY one solution. A residential plumbing repair service which takes care of all the above and below-ground issues! In the world of residential plumbing services worldwide, the most common residential plumbing problems which only professional plumbing services ought to tackle thus include:

– Dripping taps and/ or taps that continuously leak

Taps leak for various, the most common being usage-related aging. Two taps in the house with different usage always show vastly different rates of wear and consequent leaking. Older taps with threading-type valves had more moving parts & needed frequent repairs compared to the recent 90-degree turning taps where moving parts are minimal thus needing much less maintenance. Where a plumber can help is by suggesting the right thing at the right time- repair or replace. In most cases of heavy use, replacing may make more sense.

Sewers overflow for various reasons including

– Obstructions. This invariably happens in older homes where with time, sewer pipes accumulate dirt, silt and sometimes even tree-roots. Older metallic pipes had a tendency of rusting which added to obstructions on the one hand, and weakening and bursting of sewer pipes on the other. The way to go about it could involve blasting the obstruction with jet sprays or simply relaying the rotten/ broken or blocked stretches anew while retaining the rest. The best judge for the same invariably could be your friendly plumbing company.

– Kitchen waste. Kitchen waste isn’t simply water and food particles. With these comes another product which in most cases in the actual culprit. Lard, butter and cooking-oil/ medium. They are heavy, sticky and do not respond too well to mild detergents. Result? They sit at the bottom of most traps outside kitchens forming layers. With time, if it isn’t cleaned thoroughly, it stops water flowing into the municipal sewer-line. The accumulated wastes rise upward and flow outwards on to sidewalks and gardens. This though is entirely avoidable if the right plumbing services are appointed well in time who plan cleaning schedules well in advance after calculating the rate of outflows and likely sludge in it.

– Foreign objects in sewer-lines. Among the uninitiated in the human race, there is a class which believes in throwing used pads, tissue rolls and nappy pads into the commode. Most of these objects do not decompose and choke the commode and sewer line. With common-sense sometimes being in short supply this could lead to the doors of the friendly neighborhood plumbing agency who for a neat sum could do the needful.

– Pipe bursts! Pipes bursts don’t need many reasons with the foremost being usage-related wearing out. Second is the (in most cases) inadvertent use of force like an earth breaking equipment going through a pipe or making holes therein which need to be plugged. A third could be the presence of strong chemicals like acid used as cleaners at the hands of novices or unauthorized persons. A fourth, though highly unlikely could be the quality of the pipe itself being poor. All these may need varied treatments even by the best plumbing services. A pipe which is completely corroded or chocked may have to be dug out and replaced. Those with sections missing have the option of being changed in only those sections. Sometimes, all it takes could be a few welds to set right a small rusted patch.

– Faulty water-heaters! Water-heaters, be it the storage kinds or the instant, online ones either stop working or become inefficient with time. The latter could be due to the element therein weakening with time or a layer of sediments gathering on it due to hard water. You could either replace the element entirely or take it out and treat it to take the layering off. Either ways, it’s one of the usual jobs of a plumbing company.

– Faulty water-softeners! The last common residential plumbing problem deals with water-softeners. Hard-water isn’t a rarity these days. With residences coming up everywhere, water being supplied differs across localities. In some cases, despite the best municipal cleaning, chemicals like calcium and magnesium persist in the water. Flowing into homes, they leave their tell-tale signs on every surface they touch, like bath-fittings, walls, water-heater elements etc. Sometimes they also affect our health leaving behind white patches on our skin and hair that feel brittle and lifeless. The ONLY solution could be a water-softener. And one of the best persons to tell you all about it, including their capacities and capabilities is your friendly neighborhood plumbing company. They can also be of great help where your existing water softener (be it salt-based or non-salt based) either isn’t working or has a problem.

These by no means are the only common residential plumbing issues but they are some that arise all the time. And for all of them and more, the best and right course of action of course is to visit a competent and certified plumbing organization (which could include individuals!)