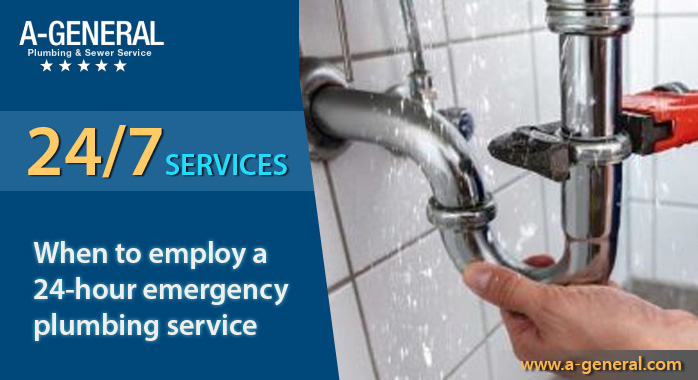 How Does One Know When To Employ a 24-Hour Emergency Plumbing Service?

Heart patients don’t go looking for Doctors, Surgeons and other Medical Practitioners when their condition turns for the worse. Nature gives them enough and more indications at the right time so that they take care at the right time. Something similar is the case of emergency services such as 24-hour emergency plumbing services. You know for a fact that the best of homes, offices and establishments do need such service every now and then. Pipes and fittings aren’t forever. With time, use and flow of liquids, they tend to wear off and come off when least expected. But thankfully, for those who observe, pipes, sewers and fixtures do give indications of being stressed much before they actually come apart.

Today we tell you of some tell-tale signs which are known to all those in the trade of 24 hour emergency plumbing and sewer services, as being signs that things are anything but OK in places most folks wouldn’t want to venture into.

1.   Taps- Most taps with or without spindles need excessive tightening before the water stops. In time, do what you like but the water just refuses to stop. Drops turn into a trickle which in time turns into a steady flow. In most cases, this calls for changing of the washer. The other problem that may arise with older taps which have spindles is that with use, the threads of the spindle start to wear out due to which the tap is unable to hold back water. Early indications include a slight jerk which gets worse progressively worse.

2.   Showers- Showers aren’t any different from taps given that they are almost an extension. Where they differ is in the last part i.e., the shower itself which with time gets clogged with dirt and sedimentation and if not cleaned on time, could result in the need of a full change of head.

A 24-hour emergency plumbing service may be called for in the above cases where they break down completely and water gushes out without a stop. Only a specialist is equipped in such cases to put a plug and stop the water flows!

3.   Water pipes- A 24-hour emergency plumber is most needed in the case of water pipe leakages. These aren’t the kind of things one should attempt out of bravado as it calls for a lot of experience is tearing up walls and replacing broken and worn pipes, the kind of stuff best left to experienced people like 24-hour emergency plumbing services. Water pipe leaks can be of two kinds. One, which occurs with time when the pipes slowly wear out or are worn away by corrosion, and the other could be result of a sudden, and often unexpected pressure in or on the pipes which results in their bursting open. The first ie small leaks show up in time and in most cases, can be expected over time. The latter can happen even to the most new of laid-out pipes. Either ways, this is one aspect of plumbing which needs the assistance of 24-hour emergency plumbing services.

4.   Sewer lines- The first signs of trouble in “sewer land” comes in the form of foul-smelling and noxious gases followed in most cases by a back-flow of sewer water which in most cases can be seen flowing down on roads or on to one’s property instead of flowing down the municipality gutters. In most cases this could be the result of blockages and obstructions in the sewer lines and sometimes even of the s-gully traps which overflow with grease and cooking oils. The very moment one smells gas from either wash-hand basin, toilet seats or even generally in the air, it’s advisable to immediately contact your nearest and friendliest 24-hour emergency plumbing services.

Be safe. It’s far better than being sorry. Keep your eyes and other senses tuned to things happening in the world of water pipes, pipes and sewers. These besides, cultivate friendly relations with 24-hour emergency plumbing services. Problems in most cases, give warning which we fail to notice but those who have an eye, ear and most of all, nose for them could be your friendly 24- hour emergency plumbing services in the New Jersey area!