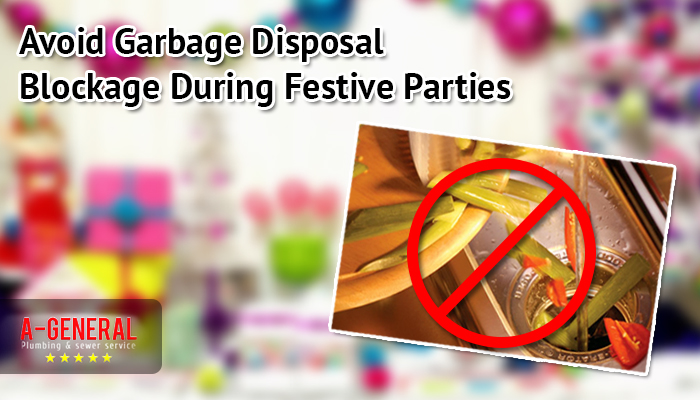 Posted by Victor Perkins on Dec.17, 2015 in Plumbing Service

Halloween and thanksgiving have gone. It’s leftovers may be gone long, but for many of us the memories of garbage disposal failure are still fresh. If you remember the day after Thanksgiving would be the the most busiest day of the year for the residential plumbers. As they are oftenly called to clean the drains and repair garbage disposal system. Sure that you don’t want to send large amount of money again this party season. Follow this easy tps and you will not just have a good party but also be saved  from clogged garbage disposals.

Clean before party :- Pour cold water before, during and after activating the disposal. This flow of water will carry food particles down the drain and the cold water will help fat and grease solidify so that it doesn’t coat the blades. This cold water will also help trace the amount of grease, then you should minimize the amount you send down the drain. After you cook any fatty food , drain as much as grease as you can then wipe out the pan with a paper towel.Do not put potato peels in the disposal. The starches on it turns into a paste and it can build up and slow the motorized blade to a halt.

Chop the food – Chop all the larger foods into small pieces before feeding them into the disposal. Do not load to many pieces at once in the disposal. Feed the disposal gradually if you want to dispose large volumes of food waste. Do not use fibrous food   celery, asparagus and artichokes, because the tough fibers can become tangled and jam up the blades. Small bones like fish bones are OK to dispose, but do not put big bones in the disposal. Avoid sending coffee grounds down the drain. They won’t hurt the disposal, but they can accumulate inside the drain pipe and cause a clog.

Maintain disposal before the party – Easiest way to clean the disposal is to run cold water while sending several ice cubes down the drain. To deodorize the disposal, make ice cubes out of vinegar. Another way to do it is  to grind up oranges or lemon rinds in your disposal.
Avoid using harsh chemical in the disposal system. It can cause clogs. Imagine you have a party going on at night and your garbage disposal starts working and all the garbage is piled up. This time you need to call 24 hour plumbing in Monmouth County and nearby areas to get it repaired. Do not let your party spoil because of clogged disposal, and it to the fullest.