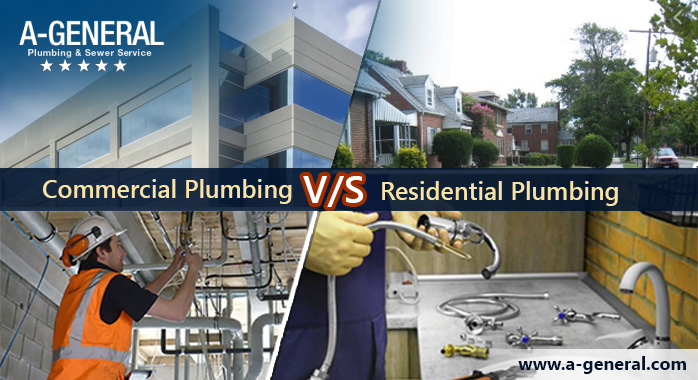 Posted by Victor Perkins on Oct.16, 2020 in commercial plumbing service

This isn’t really a question for the Smart Alecs among us. In fact, it’s rather elementary. Simply put, what could be the difference between Commercial Plumbing Services and Residential Plumbing Services? Many for a start, some of which we have elaborated below:

Home in the residential sense could either be apartments with so many rooms or residential estates spread over open land with everything laid out opulently. In either cases, the number of areas needing assistance could be limited. Contrast this with a commercial establishment which could be a small office or a giant industrial plant. The areas to be deal with could be just one toilet and a kitchenette in the least to rows upon rows of urinals and showers and huge kitchens in industrial set-ups and shared offices. The former can be handled in most cases by a single person with adequate means and machines. What the latter needs is a team, sometimes rather big, with a range of machines which could include suction and cleaning trucks to sewer cleaning to video equip and so on. The latter may even call for things like Annual Maintenance Contracts and the likes given the sheer range of activity to be done over the gap of one year.

Homes surprisingly can have more issues than most commercial establishments! Right from the sewer chocking to the water heater not working to the water-softener conking off, the range of activity, despite being limited in size can be formidable in range. That is the case of commercial plumbing repairs and sewer services could be limited to taps and faucets, an occasional toilet and sink over-flow, unless the commercial establishment being spoken about is a restaurant or commercial kitchen, in which case, it could be as varied as a home with the kitchen being the target for all manner of leakages and chocking.

Homes need one particular service which most commercial establishments may not need and that is of sewer jetting and videography. Homes, and more so older ones invariably have sewer likes that with time get chocked with mud, silt, plastics and tree-roots that come through cracks in the piping. The only way to get rid of these effectively is to jet them out from their location. These services aren’t required so frequently in commercial establishments as most have ongoing programs due to commercial considerations and tax incentives, to keep their office premises in order.