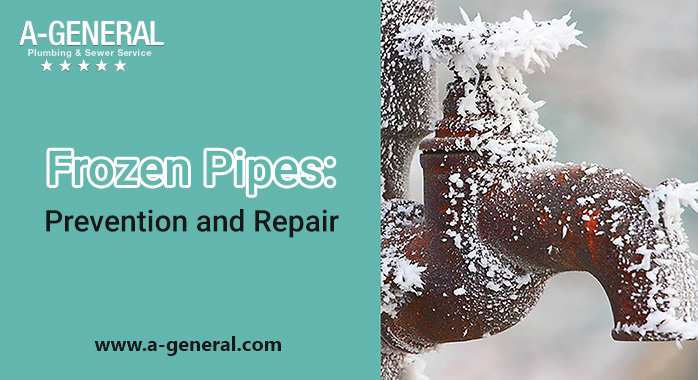 Winters are times when the North of America gets seriously, seriously cold. So cold that water freezes in exposed plumbing including pipes and faucets. And if that wasn’t bad enough, frozen water with volumes higher than flowing water can ever rip open pipes if left to stand long enough! Dramatic though it may sound, there are remedies in the world of frozen pipe repairs in Ocean County that can take care of such eventualities within the ambit of general plumbing repairs.

For that we first need to know a few things!

Why does water freeze in pipes, and then burst open the pipe?

Weather in North America heads up north post-autumn and can dip below freezing for days on end. Cold wave upon cold wave from the frozen north blasts the areas near the great lakes and areas to the south. Frozen pipe repairs in Ocean County in NJ have a field day during these months from December till February when the weather pattern exists most prominently.

Pipes laid deep within structures either in the walls or floors get a solid layer of concealment which act as barriers to keep the weather out. In such cases, water within the pipes in the absence of a direct connect with the outside world does not freeze despite being relatively cold. On the other hand, pipes that lie exposed are at the risk of bearing the full brunt of the weather with water within very likely to freeze. Once frozen, and refrozen, its volume goes up to such an extent that it can no longer be contained in the pipe. The pipe thus gives way. With pipe material in most cases being metal, pressure over time results in a sudden burst.

Pipes burst because water flowing therein increases in volume to beyond the capacity of the pipe to contain. Exerting outward pressure, the freezing ice bursts open from the pipe.

What needs to be done to prevent freezing of water?

The best way to keep pipes from bursting is to reduce the pressure on the pipe which comes about when water isn’t allowed to freeze! And that takes place when the effect of the weather is minimised on the pipes which takes place in two forms:

Pipes that are exposed either due to their being on the outside or due to walls themselves not being present (they could have collapsed on their own or taken apart due to some reason) need to be routed differently to keep them in insulated places.

Insulation goes off with time which may need to be put back in place.

What needs to be done in the eventuality of water freezing in pipes?

Water that has frozen needs to be thawed GENTLY. Water line repair and replacement services in NJ recommend using water jackets around the frozen portions with warm water within such jackets. Left long enough, it gently heats the pipe and then the water which slowly starts to flow. This heating of the pipe and then the water needs to be done gently. The other way to heat the pipe is to use anything that can warm the air around the pipe like a hand-held dryer including a hair dryer. One can also use a flame torch BUT it should never be brought close to the pipe in which case it may cut and dissolve the pipe due to the high heat it produces.

Water that heats up shall flow down the pipe till the faucet. To indicate the same, the faucet needs to be kept open to the extent possible. In time, the water supply should be back to normal.

What needs to be done in the eventuality of a pipe burst?

Pipe bursts indicate that water inside has frozen. Despite this one should always switch off the water supply up to the point of such a pipe burst.

Pipe bursts though under general plumbing repairs, is the work of a specialists water line repair and replacement services in NJ. It makes sense to use their services and get the job done satisfactorily

With the specialist bring present, it makes immense sense to patch-up exposed portions of the pipe where the freezing took place (or is likely to take place!).