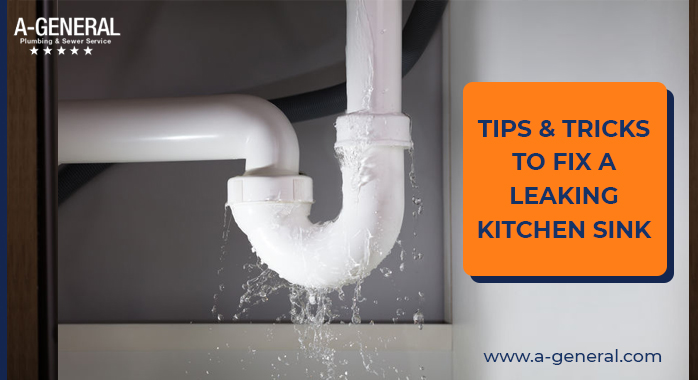 Tips And Tricks To Fix a Leaking Kitchen Sink

Posted by admin on Mar.25, 2021 in Residential plumbing service

First thing first. Why does a kitchen sink leak?

For anyone in the trade of residential plumbing services who has done kitchen sink plumbing repairs for some time, kitchen sinks leaking isn’t something new. Where-ever water flows in a restricted manner, it’s just a question of time before a blockage forms and the whole thing gets jammed. On the issue of blockages forming, a kitchen is possible the most apt place and more so the sink given all that outlet is narrow, and a variety of stuff goes through it.

From the viewpoint of kitchen sink plumbing repairs, blockages form in a kitchen for the following reasons:

1. Too much greasy matter

Where folks use the sink to dispose foods heavy in lard, butter and cooking oil instead of using the waste basket, this could be a regular occurrence. The former is heavy, and forms layers on the sides of the waste-disposal pipe. In time the layers just add up and reduce the space for water to flow past. A blockage can then be expected.

Foods including celery, certain fresh fruits including apples, potatoes, pasta and the likes do not dissolve quickly and remain stuck in the drain pipe. Folks dumping food leftover into the drain instead of using the refuse basket could be asking for trouble in a short while with the water flowing right back into the drain.

3. Carelessly dumping small pieces of plastics and others which accumulate and don’t move

People in a hurry and children have things in common. They don’t care where they dispose stuff, some of which could end up in the kitchen drain. While large pieces of plastics or plastic-coated-paper may simply not enter the drain, small ones can. If done consistently, they tend to pile-up and stick together with glue in the form of food wastes and oils. What you could get is a hardened lump which doesn’t dissolve too easily.

Ideal choke-points in a kitchen sink include:

1. P trap just below the sink

Water draining from the sink enters a ‘P’ shaped contraption that is meant to keep away gases that might come back from the drain. With a diameter of an inch to an inch-and-half, large food particles may sometimes get stuck here and cause water to get blocked.

2. U trap on the flooring

Besides a P trap below the sink, there’s another trap on the floor in the shape of a ‘U’ which too is placed with the same intent to stop the return of noxious gases from the main drain. Homes without a P trap may this point turning into a choke-point.

3. Gully trap along the building

The third and last likely choke-point is the gully trap going out of a building and joining the community sever-line. Blockages here may be for many reasons, one of which could be the kitchen waste. This simply cannot be handled by simple home remedies and may need professional help.

What should be done? Residential plumbing services as a standard suggest a few time-tested ways to avoid and/ or service a chocked kitchen sink. These may include:

1. Be careful with what you dump

If you remain careful and vigilant with what you dump where, chances are that the issue of a leaking kitchen sink may never arise. Always wipe all the used kitchen utensils free of food particles and throw the same into the waste basket. NEVER SHOULD YOU USE THE SINK FOR ANYTHING BUT WASHING. ONLY WATER SHOULD FLOW DOWN THE KITCHEN SINK.

2. Use hot water in the drain

In the event of a blockage and subsequent leaking, the first line of activity could be pouring a bucket-full of hot water down the sink. Hot water helps dissolve things like butter and oil.

Things could be far stubborn than butter and oil in which case user a pusher (plumber’s friend) could be of help. See to it that it is not torn or otherwise mutilated in any ways.

Drain-cleaning chemicals are a reality, harsh and extremely dangerous to human health though sometimes they remain the only solution. That being the case, they should be kept handy and used sparingly with extreme care and caution.

4. Use a plumber’s snake

Residential plumbing services invariably have with them what they call a plumber’s snake. A shorter version of this is available for most households. All the same, they need a degree of expertise to operate the correct way to get the right results.

5. Call for a plumber

Where after you are through doing all that you can, and the outcome remains the same, it could just be the right time to call in the experts. residential sewer line repair service in the NJ area may be able to solve your problem in a jiffy! Do that and make your life easy.