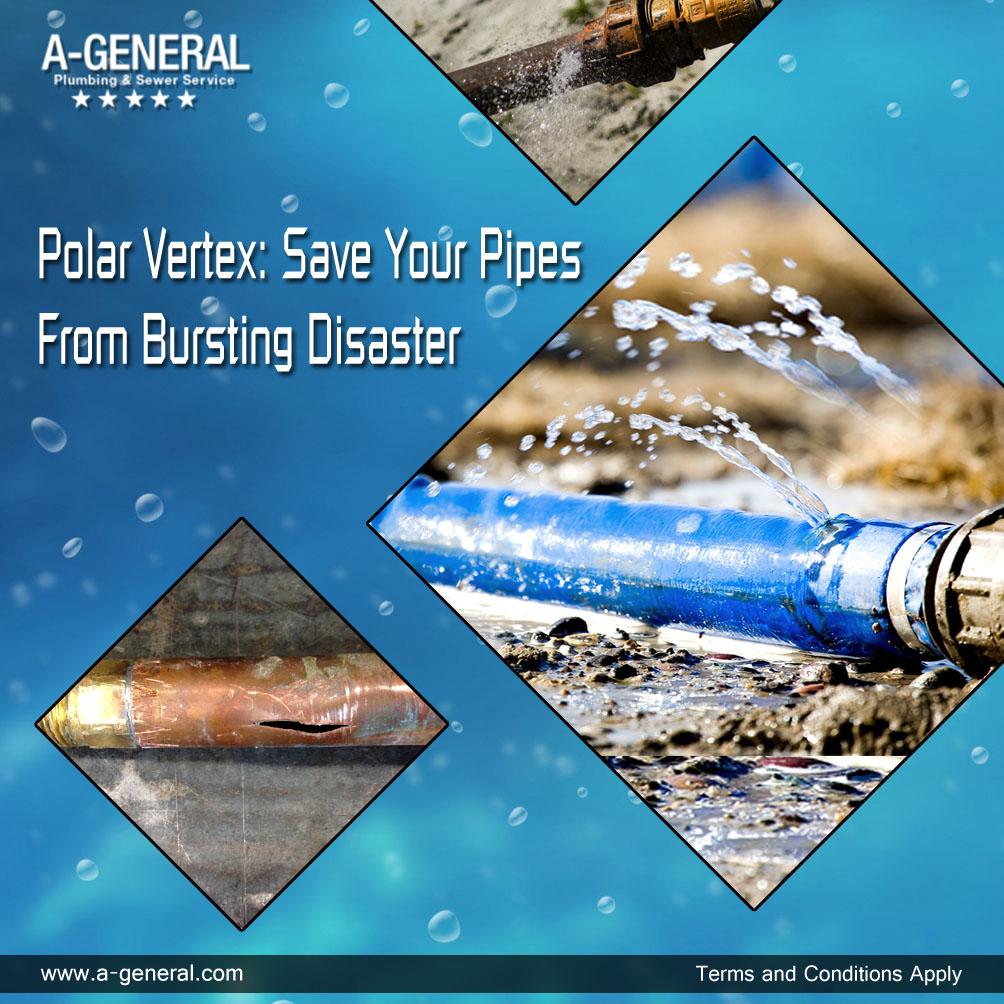 Polar Vertex: Save Your Pipes From Bursting Disaster

Last year was the most coldest and the most hottest in terms of temperature swing. Call it a natural calamity or a man made disaster, but the changes in climate are certainly affecting your drain and sewer lines. With subzero temperatures and endless amounts of snow, one could only hope for the chilly weather to end soon. However, according to the weather forecasts be ready for another brutal winter this upcoming season.

Extreme freezing temperatures always give you a hard time, especially when it comes to your home plumbing. There are various plumbing emergencies that crop up during the cold months of the year.

One of the major challenge with fluctuating temperatures is enforcing appropriate methods to prevent a disaster that can cost you thousands of dollars in repair and replacements.

What is the root cause of a pipe burst?

If you have observed, a soda can when put in a freezer, will freeze into ice to expand and burst over time. The same logic is applied to pipes as well and they also expand and burst in the same fashion as water freezes and forms a block of ice.

According to a survey conducted on plumbing issues, a pipe burst is a direct result of continued freezing and expansion in the pipe, which turns into a complete ice blockage that causes water pressure to increase downstream between the ice blockage and a closed faucet at the end. It is this very increase in water pressure which leads to pipe failure. But please make a note that a pipe never bursts in the area in which the ice blockage occurs, but comes out from the most fragile possible direction.

Tips to prevent Pipes from Freezing and Bursting

To overcome the problems to prevent pipes from freezing involves a step-by-step approach that is to carried out before the cold weather arrives and during the cold temperatures.

Steps to take before the cold weather arrives

* Remove, drain, and store hoses that are used outdoors
* Shut interior valves which supply water to outdoor hose
* Open hose bibs located outside the home to allow water to drain

* Keep outside valves open for the remaining water in the pipe to expand without causing the pipe to break
* Check to ensure hot and cold water pipes are insulated
* Consider installing specific products made to insulate water pipes such as pipe sleeve, heat tape or similar materials used on exposed water pipes

* Keep garage doors closed, especially if there are water supply lines in the garage
* Open kitchen and bathroom doors for warm air to circulate around the plumbing area
* When the weather is very cold outside, let the cold water trip down from the faucet served by exposed pipes. Running water through the pipe, even at a trickle helps prevent pipes from freezing
* Keep the thermostat set to a average temperature, both during the day and at night

Well the season of polar vertex is still going on and this is the time when you will have to face the problem of frozen pipelines. Keep in mind that if you are facing the adversities of frozen pipes, always call up your nearest plumbing and sewer service company. Only a professional plumber can guide you to clean up the mess on and inside those clogged lines. Burst pipe repairing or servicing is an integral part of any plumbers working procedure. And do remember to always hire an accredited plumbing service, to avoid any legal hassles.