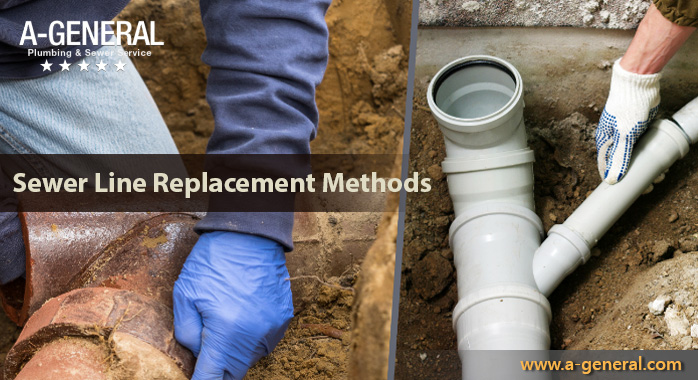 How would you react if told that your entire jaw would have to be replaced when the problem could be only with a few teeth growing out of it?

This could be a complete possibility in the world of plumbing & drain cleaning services where you do not have at your service the best residential sewer-line repair agency or alternatively the best sewer-line replacement agency. And that’s because in the world of below-ground piping for water and sewer-water, if there is one thing which remains (which of course is NOT water or waste!), it’s nd that is the fact that not all sewer-lines need to be replaced. Quite a few of them can in fact be repaired, sometimes to become as good as new! This can be attributed to the need for fast or big bucks, or pure ignorance!

What-ever may be the case, today we tell you the essential difference between sewer-line repairs and replacements, and factors affecting the decisions to repair or replace.

1) In old homes, there could be no options to complete replacements!

Old homes, and the ones that haven’t been kept well invariably go in for bad times. Sewer and piping in such places are made mostly of metal which get corroded/ worn-down with time and constant use. Some come up to a situation where the sewer/ drain line replacement agency in NJ have no option but to recommend complete replacement. The trouble is not that things need to be changed. The trouble is that it is doubly difficult when everything about the structure is all but waiting to fall flat.

2) Old and existing sewer-lines can sometimes act as the shell in which entirely new piping gets installed, courtesy epoxy compounds

A new form of replacement which to an extent takes away the fear of tearing things apart and inviting trouble in the form of things falling apart, is to use the existing sewer/ water piping as a shell to install a fresh, new layer of piping which is formed inside them using epoxy compounds, chemicals and plastics. (share the string of a video for clarity). Once laid within the confines of the existing pipe, they harden over time to form a new pipe. It’s an interesting development given that nothing needs to be done which may disturb surrounding structures. Drain cleaning services in the NJ area do use this form of repairs mostly in old homes.

3) Old pipes in most cases are made of metals which get corroded or eaten-up with time.

If the corrosion or abrasion is extensive, in the absence of replacements, complete replacements could be the only option.

The idea of layering existing decrepit sewer piping with epoxy and plastics is interesting though not without its own share of concerns, one being the condition of the existing piping. If there are extensive cracks and wear-outs through which the epoxy layer might leak every now and then, the idea could be a failure from the very beginning. In such cases, provided it is called for, the residential & commercial sewer line repair agency may have to do a very careful study to see the best possible route to lay fresh piping which could include a mix of fresh piping and epoxy in existing ones. The final call in the case of such projects is a factor or pricing and success of the project.

4) Plastics and resin-based sewer-pipes are the latest thing.

They cost much, much lesser than metal ones, are just as durable – if not more, and encourage recycling of waste plastics otherwise clogging every water-body and piping networks.

5) Presence of higher quantities of minerals, chemicals and the constituents of sewer matter.

These are the main reasons piping of any kind needing replacement! Sewer pipes are most affected by chemicals in the water and the waste carried in the sewer water. Repair or replacement should take these facts into consideration while drawing up plans and reports. In the absence of a proper assessment, the best of repairs and/ or replacement could just be for the time being with another round of activity waiting eagerly for house owners to fund.