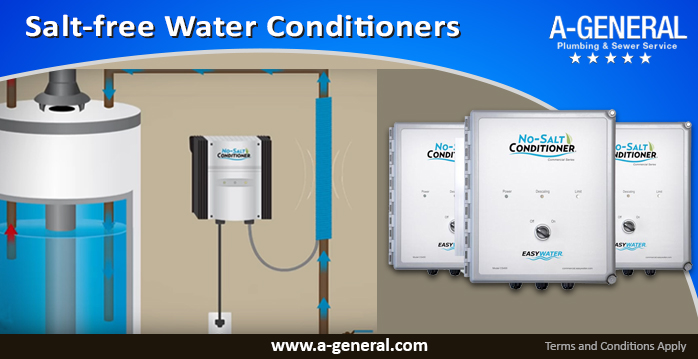 Salt-free Water Conditioners And what They Do For Your Pipes And Plumbing!

Posted by Victor Perkins on Apr.17, 2019 in No salt water conditioner

Pipes carrying water from the municipal lines to our homes can be equated to veins and arteries which carry blood to all the parts of the body. What they carry is essential to life and if they get clogged, life as we know it, can come to a grinding halt.

In the case of the heart, in most cases it’s cholesterol which does the blocking. In the case of pipes carrying water, it’s a high concentration of naturally occurring mineral deposits including the likes of calcium and magnesium. If left to accumulate for long periods of time, they form layers upon layers within the diameter of the pipes with each layer leaving lesser open space for water to flow. In time, water pressure for no “apparent” reason keeps dropping and if totally neglected, can result in complete choking of water pipes.

A-General’s salt-free water conditioners are one of the best defenses against such build-ups! And on the subject of build-up, it’s not only pipes bringing water into the house which are affected but all those through which hard-water passes. Also affected are those surfaces which come in contact with hard-water namely floor tiles in your bathrooms, faucets, taps and all manner of electrical appliances be it water-heater, dishwashers or washing machines.

A-General’s salt-free water conditioners are a boon especially to water-heaters given that the latter gets affected worse than pipes and taps because water once boiled leaves behind a hardened layer of deposits especially tough to remove by any means.

And why a salt-free conditioner? Because in the normal order salt is considered to be one of the best antidotes for such deposits BUT has its own bag of miseries- including carting around truck-loads and feeding it into the pipes, machines and all those places affected by hard water. If you do not relish the thought of lugging bags of salt all over your premise and want things to look chic, neat and clean, go for A-General’s salt-free water conditioners, the best no-salt water softener.

As for the advantages of A-General’s salt-free water conditioners, there are quite a few, including:

If it’s hard water that’s troubling you, take heart and call the specialist. Everything from then on shall be smooth and soft!