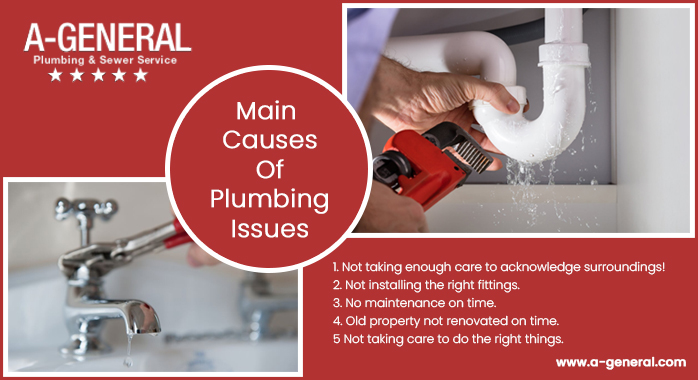 What Are The Main Causes Of Plumbing Issues

Posted by admin on Mar.11, 2022 in emergency plumbing service

Plumbing issues of the kind that need the support of general plumbing services invariably are those that have a degree of carelessness built into them. Once a tap is fitted, till time it doesn’t develop a leak, no one bothers. Even if it does, help is brought in ONLY after the drip turns into a small stream. So you see folks, the primary fault lies with most homeowners who neglect things till they last.

Today we tell of a list that most plumbing services in new jersey know to be the main causes of plumbing issues:

Hard water is a real destroyer. But how many among us care to go the whole length to get the right softener? Very few. What it does to our taps, cisterns, bathrooms is horrendous. It doesn’t end there. Folks bathing and drinking hard water stand to be affected adversely. Hair turns into hay and your face goes thru all sorts of transformations.

And that’s just one. Water heaters are another category. They are a necessity but need maintenance, especially where the water in taps is hard as it calcifies on the heating rods and reduces its efficiency. Not knowing enough is one of the main causes of plumbing issues that bring can bring the emergency plumber of Jersey City to your doorstep with horns blazing.

2. Not installing the right fittings-

Like shoes, taps and fittings also need to be of the right size and rating. If they aren’t, there’s every chance that due to the gaps, things may spoil over time, cause leaks and worse, be the cause behind people slipping and hurting themselves badly. Taps in particular are things that most folks someone don’t give much thought to. As long as there’s water every time you open these taps, life’s good and there’s just about no reason to complain. But what if the quality of taps is bad or they somehow aren’t supposed to be where they are fitted? You give an open invitation to disaster.

3. No maintenance on time:

Right from roofs that leak to basements that fill with water every time it rains to sewers that back-flow or over-flow if there’s one common thread thru them all, it’s this: criminal negligence!

Waiting till the end will bring your end closer. Most folks ordering emergency plumber services invariably can be blamed for being negligent. It makes immense sense to get things repaired, replaced, cleaned and serviced as a part of regular, time-bound maintenance- most so things that can bring you to grief including sewer lines, roofs and basements. The first in particular you won’t want to live with; neither your neighbours. It thus makes sense to take care on a regular, time-bound basis. Leaks or no leaks, if there’s even an inkling of doubt, action ought to be taken. The same is the case with water softeners whose effect may not be as dramatic but can cause long-term problems.

4. Not taking care to do the right things:

Karma is a boomerang that comes doubly fast to hurt you. Take the case of kitchen sinks. Foods that decompose and dissipate are fine. But what about those that don’t – including plastics, lard, butter, and cooking oils? Vegetables and other waste that have volume and don’t disintegrate fast can cause the water flowing out to choke. What you then get is a pool that you won’t ever swim in! Worse are cooking mediums. Greasy and hard, they form layers, harden and reduce the diameter of pipes. In u-shaped traps and gully traps, these are especially hard to dislodge. If there aren’t done away with regularly, it could call for the NJ emergency plumber to replace them.

5. Old property not renovated on time

Homes, like humans, grow old. And like humans, their essentials including plumbing and sewers start to disintegrate. The only way is to repair, renovate or replace things and move on in life!