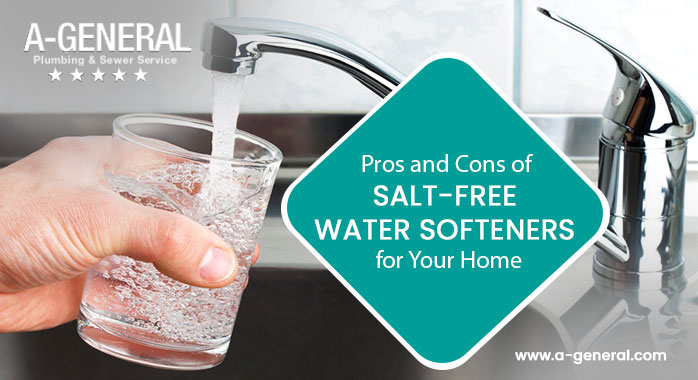 Pros And Cons Of Salt-Free Water Softeners For Your Home

Posted by admin on Apr.27, 2022 in No salt water conditioner

If you’re one of those unlucky folks who get to (inadvertently) see large patches of salt and magnesium on your bath fittings every time you need to use the toilet, this could for you for sure.

Water in its most pristine form i.e., that flows from the heaven above is pure and entirely salt-free. Nearing the earth, it meets winds carrying salt from oceans and seas sprays. The process of contamination of rainwater thus happens even before the droplets hit the earth though at a relatively slower pace. Once rainwater hits earth, all hell breaks loose as far as contamination and purity go! Flowing down over rocks and earth, the water becomes a storehouse of salts. The aspect of hardness is introduced with the mixing of magnesium that’s a mainstay with certain kinds of rocks.

In the end, what we get in our homes is a package that’s rich in salts in minerals; so rich that it may cause problems both physical and material. Hard water affects our bodies. Hair becomes dry and hay-like brittle, skin becomes dry and patchy. Excessive salt intake brings its own share of problems. While this goes on in our bodies, hard water also affects things around us. Take for instance all the stuff in our homes. Steel and iron corrode at amazing speeds. Electricals and appliances fail much faster due to the clogging of salts. Sheet metal of most kinds corrode away revealing holes.

All this leaves us only one solution. Water softeners.

In its earliest avatar, water softeners were salt-based which meant an active use of large quantities of common salt in a water bath. Using ionization, these salts attached to the salt and minerals in the water make the whole mixture heavy and easy to filter thru back-flushing. What one got was “soft water” that had greatly reduced the quantum of salts and could be used for anything from drinking, bathing, washing and cleaning. The effect was close to the water that in its original state was low on salts.

The process though was tedious. Salt had to be stored in quantities. Space had to be ear-marked with the right set of structures to do the entire process. And given the amount of salt it processed, wear and tear were a given.

But what came out was surprisingly CLEAN!

Then came the salt-free water conditioner which promised practically zero hassles in the way the world needed to soften its share of potable water. And the world flipped for it!

That said, the salt-free water softener does have its share of drawbacks. For one it isn’t really water softening but water conditioning given that hard water goes thru a process called the Template Assisted Crystallization that catalyses the salts into hardened crystals that can’t bind to surfaces. In simple terms, it means all the surfaces that this softened water touches will be less affected by salt build-up including corrosion and ugly lumps of salt. But it won’t go away entirely- quite unlike salt-based softeners where salts were actually removed from the water making the latter “soft”!

While surfaces including glass, metal and ceramic would show lesser signs of hard water, the build-up still takes place thought at much lesser speeds. Compare this with a salt-based softener where the salt is removed up to its desired quantities, and you get to know the difference.

The choice then is entirely upon a user. Do they want convenience or do they want results? Answering these questions could shed light on what they ought to buy.